Since I managed to finish and launch our new site this week, I did something I haven’t done in quite awhile. Nothing. Me + couch + cocktail + remote control = my evening. I don’t tell you this to stir up envy in the event you had a busy night. I tell you this because in scrolling through my various entertainment options, I decided to finish out the final season of “The Newsroom” on HBO. If you haven’t seen it, it is a show about life in the newsroom of a 24 hour news station. I was hooked from Jeff Daniels’ character’s rant in the opening moments of the very first episode. There’s some strong language in it(it is HBO after all), but with that warning, you can see it here. (This clip has nothing to do with the rest of this post, but it is pretty incredible.)

I bring this up because the episode I watched tonight featured a small story arc concerning Twitter. The station has been bought out by a young corporate hotshot concerned with ratings and revenue. Despite the fact that they have real news to report, the News Director orders them to run an interview with Lady GaGa’s manager because one of her tweets is trending. This demonstrates something I discuss often during our classes — what is trending on Twitter becomes news.

I realize that “The Newsroom” is fiction. It isn’t real. But, it’s based in reality and it sparked a desire to really drive this point home. A current trend on Twitter is a “game” called #FiveWordsToRuinADate. (Those of you who have some Twitter knowledge are aware that the name of the game is written as a hashtag, which allows anyone to post a Tweet using that hashtag and have their Tweet show up in the overall feed.) For those of you who haven’t seen this particular game, it is fairly easy — come up with 5 words that could instantly bring a date crashing down around you. Such as:

Get the idea? Definitely not “real” news.

But, a quick search on Google for the phrase proves otherwise. I took a screenshot so that you can see the current results. (Click the image to see a larger version.) 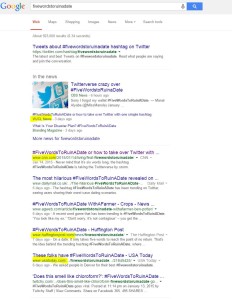 I took the liberty of highlighting the news sites covering this trend which currently show up on page 1 of Google. (Incidentally, page 2 has an even higher concentration of news sources.) It’s everywhere. It has become news because it is trending. Why? Because media outlets (of all types) are driven by advertising. Advertising revenue is generated by readers/viewers. It’s a simple equation: more people consuming content = more advertising revenue generated. Trends, by their very nature, involve a large number of people, translating into potential revenue sources. Thus, trends become news.

Want to join the discussion?
Feel free to contribute!